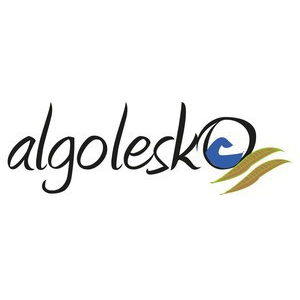 “The sea, a source of goodness”

Ideally located in the south Finistère part of Brittany, an area with a deep-rooted maritime background,Algolesko is Europe’s leading producer of Royal Kombu – Saccharina latissima – a variety of macro-algae endemic to Brittany. This exceptional geographical location has enabled Algolesko to develop open sea farming in a Natura 2000 area, listed according to a European classification system based on stringent water quality criteria. Algolesko controls the whole production cycle for its algae, including: hatchery, growth at sea, harvest, processing, packaging, storage and shipping. Algolesko’s robust know-how allows them to cultivate other species such as the red seaweed Asparagopsis armata, which is widely used in the pharmacological and cosmetics industry. Many other species can be produced on demand. Algolesko also runs an algae trading business, with sales of Wakame – Undaria pinnatidida – a variety traditionally farmed in South Finistère. With its present 150 hectare maritime concession, Algolesko can produce 1,500 tonnes of fresh produce annually and new concessions due to be opened nearby will soon raise their annual production capacity to 5,000 to 7,000 tonnes of fresh produce.

Farming, processing and packaging on demand

Algolesko develops true partnerships with its clients, by offering customized cultivation techniques, according to needs. Three types of processing: gentle drying, at no more than 45°C, salting without anti-caking agents and freezing. Our processed algae are provided for the wholesale or retail trade, whole or as flakes. Algolesko will study any packaging solution that can meet client needs.

The quality of Algolesko’s seaweed is recognised everywhere, in France and in their export markets, where buyers appreciate buying from Europe’s biggest farmed seaweed producer.

The sea, a source of goodness

Algae have a high nutritional value. They are rich in fibres, minerals and protein. They also have antioxidant and anti-radicular properties thanks to the metabolites they contain: carotenoids, polyphenols, vitamins, polyunsaturated fatty acids… As well as providing a source of food, algae can therefore be used in nutritional and health applications, in dietary supplements and in cosmetics.

An innovative range of products

Algolesko has developed a “freshly-harvested” range of Royal Kombu seaweed. These are young plants, harvested after around 6 months of growth. They are then about 1.5 m long and their nutritional qualities and flavor are fully preserved, with a tender, crisp texture.

Also known as Saccharina latissima, its botanical name, Royal Kombu belongs to the brown seaweed family, with a shiny browny-yellowy color, and can be up to 3 metres long when fully grown. Its thick thallus or blade has an undulated margin, and its stipe or stem is equipped with a root-like holdfast. Algolesko’s Royal Kombu is highly appreciated for its nutritional uses, and also used in the cosmetics industry for its purifying properties.Un texte ! Vous pouvez le remplir avec du contenu, le déplacer, le copier ou le supprimer.

Salty and sweet flavor – Flavor of the open sea

In Japan, kombu is widely used in Miso soup by infusing the seaweed, mainly for its high sodium glutamate content and for its taste-enhancing properties. Wakame seaweed, with a sharp, crisp texture and a bright green color, is more often used in salads.

When drying, Royal Kombu becomes covered in small white spots, known as “kombu flowers”, that are full of saccharoids and glumatic acid. Kombu should therefore never be washed before use. It confers to the cooking water and dishes alike its smooth texture and its salty ocean-rich flavor.

While healthy eating is the best way to preserve one’s health, natural products are also essential in protecting the skin. Our algae are used by the cosmetics industry, in particular for their antioxidant, hydrating, and coloring properties. Algae extracts are used in regenerating and refreshing skin care products, emollients found in exfoliating products and anti-ageing creams, and also in sun creams. 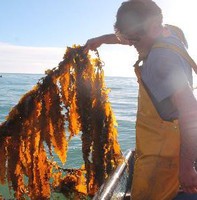 Kombu, a creative ingredient of Far-eastern cooking and European cooking

Kombu is used in many different creative ways in Japanese cooking. “kombujime” is one of its most popular uses. Small fish are wrapped whole or in fillets or very fine slices in a slightly humid kombu leaf then left to macerate for a few minutes to a few hours. The fish takes on a soft, melting texture, with a fine, pearly sheen and a subtle sea-salty taste. They can also be macerated in vinegar to make a condiment. Sliced, kombu can also be fried or sautéed just like any other vegetable. Steeped in a salty or sweet marinade of soy sauce or saké, it becomes a delicious licorice-flavored breakfast delicacy, full of calcium, potassium and iodine. Kombu salt, or “shio kombu” has a delicate violet taste. It is produced by boiling it dry in salty, aroma flavored water. This kind of kombu salt is used as a condiment in various fish-based dishes. It is one of the two ingredients that go into dashi. It can also be used on its own, without the dried bonito fish, in vegetarian dishes. It can also be eaten fresh as sashimi. It helps cook starchy vegetables, such as beans, lentils, chick peas, etc., while adding flavor. It is also widely used in Chinese and Korean cooking.

Master chefs from the Far East who work in Europe brought with them their creative uses of algae. European chefs looking for new inspiration in ethnic cooking have now also adopted seaweed preparations, adapting them to western culinary habits. For more everyday uses, sushi made from nori (red algae) are now more and more popular as a take-away dish.

Brittany is in the vanguard, and the food processors in the cluster are developing attractive algae-based culinary preparations (fish “rillettes” and fish “terrines”, stuffed fish, tartare, tofic or algae burgers, potato patties with algae butter, etc.). These are also available for the wider food processing industry.